Digital Compact Is Dead ... Or Is It? 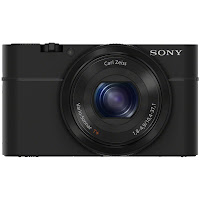 It was only yesterday that I, quite theatrically, announced the death of the digital compact, and here I am now preparing to work hard at telling you that the news of this particular death have been vastly exaggerated.

How come, you may be wondering - provided you didn't already click away in disgust at such flip-flopery (or should I have said frippery?).

As you may be able to recognise from the photo above, I have had a chance to play with Sony DSC-RX100 recently. It is a compact, and that's no lie. With the lens fully retracted it measures a very pocketable 102x59x36mm, and weighs 240g. So, we're not talking bridge, almost SLR sizes here. Not even Fujifilm X100. You can safely think one of my previous compact favourites, Sony DSC-T100 (shown in the death post).

Now, I won't bore you with any sort of in-depth or formalised type review here. Please don't even consider this to be any sort of review in the first place. What this is is my retraction of the death claim with a few reasons thrown in so I don't look a complete muppet (even if I probably am). If you want some really good and in-depth reviews GIYF, my friend.

Here is what I found makes this little camera a must have:

While on paper the sensor size is nowhere near even the Micro Four Thrids, APS-C, let alone Full Frame size (Sony calls it 1" sensor - it isn't, but that's beside the point), you really need to see the results before you try and criticise. For the camera of this size, and even for the camera at this price point, the images are stunningly beautiful. You'll be hard pressed to see the difference between Sony RX100 and a Fujifilm X100 in average compositions, and if you don't enlarge too much. Yes, we can drill down to detail and show, without a shadow of a doubt, that an X100 or a Nikon FX DSLR are (far) superior, but for everyday use, and as a second (third?) camera RX100 images ROCK!

The depth of field (creative blurring, bokeh, if you want) is very good when you consider the whole package. Of course, the maximum aperture of 1.8 is misleading, as for the sensor size, and lens type it is really only equivalent of 4.9 on a 35mm camera, and yes, it decreases rapidly as you zoom in, but still. For the size and convenience you do get quite a lot to play with, even if you mostly then have to shoot at the widest lens position - which is not bad in itself. After all, your legs are always the best zoom lens.

While on the subject of zoom, RX100 has only a tourist repulsing 3.6x optical zoom, but at lest with Zeiss lens it works like magic. Also, I have actually made myself try Sony's Clear Zoom setting, which does some software jiggery-pokery with the first steps of digital zoom (effectively up to double the optical 3.6x), and amazingly it worked great! So, if you really, really have to have that 7.2x zoom, RX100 will let you almost have your cake and eat it. Just don't go into full digital, non-Clear Zoom zone. It's dire.

Flash. Nowhere near as good as on Fujifilm X100 (can that be bettered?). But, unlike even the top range DSLRs, the built in flash can be tilted ny hand for a bit of a bounce. Not so flexible or precise as big guns, but way better than 99% of built in flashes provide. And it does make a difference. Try it sometimes.

Options. These are truly galore. In fact, there are probably more ways to use the RX100 than a full frame professional DSLR. OK, not all of these ways are good or even sensible, but the options are there. Including a totally, fully, full monty, manual. And that includes flash power adjustment (you may need it - it is sometimes overenthusiastic).

Is there more? Sure there's more. Have a look at all those reviews. After all, they include sample images - which I don't (you're not clicking on enough ads for that yet).

Is there less? Of course! Every product has it cons, as well as its pros. Here's a few for the RX100 - none of them a deal-breaker if you ask me.

It can be too small. Yes, if you have large(ish) hands you may find RX100 a bit too small to hold. This is helped by using one of Richard Franiec's excellent grips.

Some have complained about non-tilting LCD. I am not bothered, useful as they are in 0.1% of use cases.

Some have complained about no viewfinder, electronic or otherwise. Yes, it'd be nice to have, but I think camera would feel a bit awkward pressed against the face. It is just too small for that.

No flash hot-shoe. Now, this is a real bummer. I'd love one, too, for a proper TTL flash. If it's your cup of tea, you can have grips with slave flash to the side, or a slave flash completely off camera (but this latter setup is not what this camera is for). Chalk one for the opposition.

Tripod mount not centered on lens axis. Another slight bummer. Would be a nice one to have, but I guess it's a compromise due to the small size. Not a deal breaker in my book. If you really, really need a centered tripod mount you should probably be using a different camera.

I could try fishing for more cons, but a) I think I'd probably come back empty-handed, and b) they would just unfairly detract from the greatness of the RX100. So, just stop worrying and have a look into your bank account. If you have £450 to spare, and you need a pocketable camera to almost match the best large sensor ones out there, you do not need to look any further. As a matter of fact, you may find you are using it more than your beloved DSLR.

Try slipping that into your shirt pocket!

There, I said it! And no, that is not me in the photo to your left. Unfortunately? Not so sure. You tell me.

Anyway, here's one holiday that, on the face of it, I could easily subscribe to, what with being a radical atheist, and all that.

Well, yes. Sort of. At least it's not obviously a religious event.

However, it has almost as much meaning as Christmas (or Hanukkah, or Ramadan, or what have you), which is none, really. It's just a marker, making it easier for us to refer to the times past, and future. You should already know that it is not really possible to refer to the time present: by the time you referred to it it's gone and become past.

Anyway, back to the issue at hand. Is there really anything special about a marker dividing our time ruler into (almost) evenly spaced periods? No. So why do we celebrate it? Well here, I think I have a few good reasons.

For one, why not? Everybody likes a good party. OK, not necessarily everybody, but you know what I mean. Miserable bastards don't deserve either a party or a new year (non-capitalisation deliberate).

Two... Do we need two at all, seeing as one, above, seems to cover any and all possible reasons? Oh, OK. I'll give in. Here's reason number two: we made it through another year alive! Yes, we could also say that then we can celebrate every single day we wake up. Well, in fact, I do. I just don't make it into a big party, and usually don't invite others to join in. I do give myself a present every now and then though. So, in summary, yes, there is a very good reason to nominate a day in the year when we celebrate survival, and hope for more of it. The fact that we choose to celebrate this on a particular day is just for ease of planning and remembering. After all, in ancient Rome, the year began in March, with the spring equinox.

Three? No. We most definitely do not need a third reason to eat, drink, and make marry for the New Year. So, without further ado, I wish you a very happy new year (non-capitalisation deliberate), and hope to see you for the next one as well.

Stay well, and have fun!

PS
If you're wondering why a repost (again), it is the same for New Years as for Christmases: deep down, they're all the same...