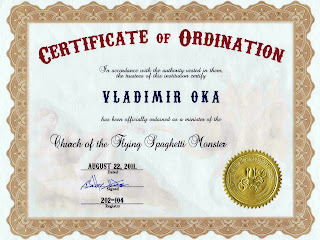 Now taking advance bookings for weddings and suchlike in enlightened jurisdictions recognising this certificate of ordination. The exact rites and fees agreed on a case by case basis.

We Are Everywhere
No comments:

I should really know better, but I have been watching reality TV...

And, while I was at it, a particular turn of events got me thinking. A groom desperate to find a church - any church - to get married in opened all sorts of questions - to me, at least. In this particular case the religion is Catholic, but I am sure the thinking - and the problem - applies to almost any other religion you care to name.

Let's then see what is it that I have in mind here...

To add some flesh to the skeleton description above, we have a groom (and apparently a bride, too) who wants to get married in a church - any Christian church by the looks of it - but has a problem of never really having been to one (apart from probably his/her own christening as a baby). So, he phones the local priest and, after some toing and froing manages to book a church wedding. The priest plays a bit hard to get at first, but after a while gives in - for whatever reason. For the point I will (try to) make it doesn't really matter if it was just because he realised it's a propaganda opportunity (those religionistas never seem to have enough of wasting my time and money on the BBC).

OK, so let's look a bit deeper at what happened here...

We have a man, the groom, and a woman, the bride, who have never ever in their entire lives cared the least bit about the religion, Catholic or otherwise, but now want to get married in a church. So far so good you may think. A couple of people who, regardless how feebly, seem to have seen the light. And shouldn't priests be quite happy to get as many new converts as possible? After all, at least according to the Christian churches, once you have converted, repented, and whatever, you can hope for getting yourself into god's good books, and eventually into Heaven. So, a good thing happened, no?

Let's look what we actually achieved here: we have a couple who couldn't care less about religion - any religion - who agree to tell a few lies so they can get the visuals of their wedding just the way they want them. I am quite sure the last time they see the church - any church - and the priest - any priest - is going to be on their wedding day. So, if everything is just as the church is telling us (and them), they are actually on a one way street to Hell, with pretty much no hope of redemption. And, unless Catholic church has started recruiting only half-wit clergy, the priest who agreed to marry them knew that as well as I do.

So, if we develop this argument a little bit further, that self-same priest has knowingly pushed two people straight into Hell - straight into Satan's welcoming arms, as it were - two people who (had they not been baptised at all before might have had a bit of an easier ride in the Purgatory. The logical question stemming from this is: is this priest just a very mean religionista who has wet dreams about unbelievers burning in Hell, or is he in fact Satan's agent hunting for poor souls like these who may be misguided, but are by no means necessarily hell-fire material?

Obviously, being an atheist myself, I do not believe there is a Satan out there to work for, I think it's the case of a deluded priests trying to have some legal fun with their victims (as opposed to paedophilia which is - if you are a Catholic priest in particular - in fact illegal). Which, of course, does not make the behaviour any more noble (it probably makes it even worse, considering working for a real Satan may not be something one chooses of their own free will - Dr Faust excluded).

What it does amount to, however, in either case is a horrible con, and one that actually works three ways. One, the poor couple are conned, for having been sold a church wedding but actually getting a ticket to Hell - and it can be hell once you realise the one who married you did it to hurt you, even if there is no Hell. Two, the church is conned since the marriage does not in fact deliver souls to Heaven. Finally, three, Satan himself (herself?) is conned, too, because the poor couple, in fact, do not believe in  him (or his counterpart god) - and if people don't believe in you you don't really exist, do you?

Therefore, a word of advice to all interested parties before I leave (Satan included): do try and find a cleverer way to get both into people's lives and on the BBC. OK? Because, the way these things are being done is really poor brand management. In fact, the best way to go about it would be to just give up and vanish into nothingness you are. The world will be a better place for it...

PS
If there really was a Hell for people who have been behaving in a criminal manner here on Earth, I would like to put forward and application in the name of one Nadine Dorries of the Tory party and other sinful pursuits' fame. The only worry is, she may be rejected for fear of displacing the big boss...

I know it's been a while, but I have been busy (yes, it does happen on occasion).

And, while I was otherwise engaged, another luminary of the digital age has left us to continuously look for ways around this valley of tears we inhabit (and no, I do not mean the Silicon variety). To stop beating around the bush - and especially stop trying to mint horrible metaphors - let's all stop for a monet and reflect on dmr.

If you thought the death of St Steve left the world poorer for a giant then you either think the same of Dennis Ritchie - or you have well and truly lived in a cave (or care only about how shiny and Fisher-Price like is your tech kit). Because, and if you didn't know you should really look it up now, a huge amount of the computing kit and software we use today rests on the shoulder of another giant - Dennis Ritchie, dmr.

No need to say more, really, so let me finish with the canonical "Hello, World!" program written in correct C (unlike elsewhere):

Oh, and if you are wondering why I chose exit value reflecting not everything went well with my little program, it is, of course, because there is something a little less well with the world with no dmr in it. 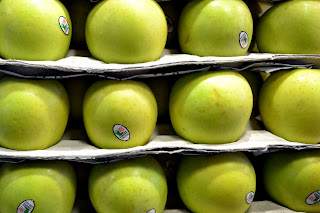 Not much more to say, really. I never really liked you, Steve Jobs, but I have always respected you. I have also always appreciated immaculate design of all the various and varied kit you and Apple churned out over the years. Business practices? Not so much.