Beer: Too Much... And Not Nearly Enough

Contrary to what you may think I did not have too much beer...

As a matter of fact, I didn't have nearly enough of the brown nectar. This is mostly because I simply had too much to do. And, maybe surprisingly for some, I had too much to do in the office. Maybe it's good. Maybe I will manage not to bring yet another company to it's knees. But, there is a light at the end of the tunnel - and it's not a train. In fact, I know exactly what it is: RAAJ. It may be (a bit) more about the jazz than real ale, but Reading Real Ale And Jazz festival is a nice place to be. Better still, my ticket has already arrived through the post. So, here's to Thursday evening fun, and here's also hoping it doesn't rain.

I hope I'll see you there...
No comments:

Grey Noughts is proud to introduce its new sibling. Very early this morning, way to early to tell you exactly when, our sister-blog Grey Books saw the light of day. Or, rather more appropriately, it saw a glimpse of a grey English summer dawn through the eyes still half closed.

Grey Books is really an offshoot of our Reading... page. As you can read in a bit more detail in the inaugural post, I felt that sometimes a few lines of an opinion about the book I've just read are not enough. To cater for such cases, and not clog these pages even more, I have decided to start a new blog, one dedicated entirely to ranting and raving about the books I read.

Will it be a success? Of course not! But at least it will avoid the pitfall of Grey Noughts which is a veritable mish-mash of everything and anything you can imagine - and then some. And I am reliably told that consistency of theme is a key to success in the blogosphere - and probably in life, too, but then is there life outside of the blogosphere?

Anyway, you should definitely hop over and check out Grey Books for yourself. Currently it only has the opening speech, as it were, but it will grow. I can even give you a little hint that a certain recently finished book will get a right old bashing, and very soon!

And with that, I give you... Grey Books!
No comments:

Religion: Holier Than Thou

Our old friend vjack had a bit of  rant recently...

But no, this is not about how I felt the need to chastise him over his chastising of Richard Dawkins. Well, not really because he chastised him, but because - regardless of the riposte - he chose to see RD (just) as an atheist, rather than what he mostly stands for in this world. It is actually the whole of vjack's rant I want to address here. More precisely, I'd like to take issue with the whole concept of "rating" anyone's atheism. What I think vjack totally failed to see, even if his rant was almost on target, is that atheism is really a very discrete state. Binary, if you want. You are either an atheist - or you are not an atheist. It is not possible to not believe in god just a bit, or don't believe in god more than I don't believe in god. Such a notion is actually quite stupid.

Therefore, I submit that the whole vjack's rant is pointless, or rather, that it misses the point completely.

It is not at all about being more (or a better) atheist than someone else. The only thing that can be graded in this respect is how much one fights for the atheism and it's goals. In other words, you may (or may not) be a better atheist propagator. In that respect vjack's rant - at least when it concerns RD - is actually very wrong. For various reasons (but not one of them being that RD is a better person than vjack) RD is a better atheist propagator than both vjack and your truly. I think there should be no argument about that. And one of the main reasons this is so is precisely because RD is primarily an evolutionary biologist and an author - and a very good one he is, both author and evolutionary biologists. It is precisely these qualities which enable him to be more effective in his atheist propaganda. Bot vjack and yours truly still have to work very hard to equal - let alone beat - that.

So vjack, less ranting, raving, and rating, and more of the usual good work...

As you can see below, there's no business like five-a-day...


Hot Cakes by =vlad-the-impatient on deviantART

If we came from apes,
how come there are still apes?

If we came from Europeans,
how come there are still Europeans?


I guess RagingRev won't mind if you used it yourself...

PS
It is left as an exercise for the reader to figure out which colour corresponds to an atheist and which one to his religious interlocutor. There will be no points awarded for also figuring out which one holds stupider beliefs or lack thereof...

Formula 1 introduced some changes to the rules this weekend...

And - surprise! surprise! - Red Bull team are not very happy about it. Yep, they're not going to be able to use their unique exhaust diffuser technology any more this year. Now, I don't know enough (or much, really) about this technology, and especially not whether it is what made Red Bull cars so invincible up until now this season. It may very well be that it's all up to Sebastian Vettel. It may also be that Formula 1 governing body is playing favourites here. But on second look, it's not that Red Bull are the only ones using this particular technology. It's just that there seems to be that they may have made it work best. There was no telling if some other team(s) might have caught up with it, maybe even for this weekend's British Grand Prix. So, even if I can appreciate Red Bull's worries about being treated unfairly, I'd say that at least rules are being applied to everyone in the same manner. Plus, if I spent some time on it, I'm sure I could find similar examples in the past. And, finally, Red Bull should be happy that Mark Webber topped today's first practice - even without the exhaust diffuser.

Whether that's something to worry Sebastian Vettel,
is another matter entirely...

I have recently unplugged myself from politics...

Well, at least a little bit...
No comments:

I hope you'll enjoy this image...

'Cause, heck, can't be bothered to blog today either...

Food: On The Table

You may enjoy some pasta with meatballs... 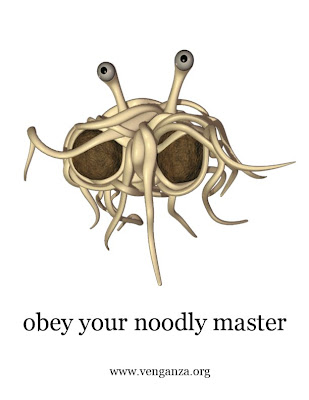 As I am too busy putting food on my table today...
No comments:

BBC managed to serve up another waste of my money...

Lucy Kellaway apparently spent 15 years of her life studying CEOs. Which would be fine and well were it not for the fact that the BBC chose to let her enlighten us about the frankly useless part of her "research". Surprise, surprise, when asked a bog standard job interview questions, CEOs give bog standard job interview answers. This fact wouldn't be (and isn't) bad or surprising in itself, were it not for Lucy Kellaway's breathless interpretation of it as a discovery almost worthy of Pulizer, if not Nobel, prize.

No shit, Lucy: ask people what their flaws are and they won't tell.

No shit, Lucy: ask a high fliers the same question and...

What did you expect?

And as for the BBC, please be more careful with my money...
No comments:

From Born Again Pagan, via Rosa Rubicondior, I give you:

I know exactly what I want for Christmas*: a Google Profile...

Well, actually, I'd like to have one right now. Heck, I'd have loved to have had one for quite some time now. Alas, we who throw all our lot with Google by signing up and diligently using Google Apps (for Domains, at least) seem to get a short shrift in this respect. No Google Profiles for us. At least not yet. Now, I am not all that mad about people being able to check out my particulars on such a profile. I'm not even sure I'd have made it public had I had one in the first place. What does really get to me is that not having one prevents me from using quite a few of other Google features. OK, the Buzz may not be very high on that list, but Google+ sounds just like the social network for the rest of us (i.e. us Facebook deniers). And there's more which are probably not worthy of mention. And yes, I could go and use my old (but still active) @gmail.com account, but that would mean juggling identities and if I was into that sort of thing I'd have been a spy, not an engineer. Even more sadly, as it is always with Google, the support is "coming" - just don't ask when. So, in that light, I can only express my utter discontentedness, and plead to Google:

* No, I did not suddenly started to believe in god or even Santa Claus (aka St Nicholas). I am just using a well known word to denote a well known date, especially in relation to the propensity of people to dish out nice presents on said day. So get off it. OK?
No comments:

Beer: Too Drunk To Spell

No, it's not me. I can spell even when inebriated... Honest.

What it is is a cause for celebration (I'm thinking a nice pint of Dr Hexter's Healer if I can get to one). The celebration itself is for reaching #1 in Google's search result ranking! Yes, you read it right: there is a Google search that will spit out yours truly's blog as #1 result. As a matter of fact, your truly occupies both #1 and #2 spots for this particular search. Yes, yes, I even beat Publishing Industry News. Go try yourself: click here (or here, if you prefer .com). Sadly, as you can see if you closely examine the search term, this is mostly for the illiteracy of JK Rowling's fan base. A bit strange for people who either have or want to read some books.

Actually, very strange, because they tend to misspell the name of their (and the books') hero. Maybe it's just those who get their literary fix from the movies? But those would presumably have seen Harry Potter's name in much larger print than if they've bothered to read a book. Or maybe they were just drunk? I mean, there's more people enjoying Harry Potter than just kids who don't (OK, shouldn't) drink at all. If I were JK Rowling I'd be a bit worried. Although I don't think she is: she's got too much money now to really care about more that just more money. But I've said all I had about that in the post that made me famous (well, a temporary #1 in Google search results). And you don't even have to search for it:


PS
The search ranking may have changed between the time I write and you read this.
No comments: