We've just had a very interesting election here in UK. Unlikely bedfellows now are in government. There's a host of changes in store for the country, and an interesting mix of policies. Among those, there is one I wrote about quite recently - the issue of ID cards. And, with the new government this seems to be scheduled to be resolved in a way I completely approve of. But will it actually happen, the promised scrapping of the whole plan? We won't know until it passes the Parliament, but the new coalition being a bit of an unknown, we may even live to see it break down before passing this particular bit of legislation. Therefore, I am not opening the champagne yet (it would most likely be a single malt or a good ale anyway), and the message I have for Dick Clameron is: we're watching you!

Yes, I have upgraded! Not that there was anything wrong with the Sony PRS-300 in particular. The clincher here was that I am finding myself needing to take notes, and highlight text while I read. Being a non-native English speaker the addition of a dictionary helps, too. It would have been better if there was a choice of languages available, but I do mostly read in English so no great loss there.
I thought memory card and MP3 support would also be a very good thing, but I must report that that may just not be the case. Of course, it will depend on your particular use case, but when I tried putting my favourite playlist numbering 1,448 songs onto a memory card the boot time after disconnecting from the PC turned from seconds to minutes - a lot of minutes, too.
Same happened when I added a memory card with a few hundred books. If the extended boot time was a one-off thing after adding the files for the first time it would have been OK. Unfortunately, it happened every time when disconnecting from the PC - even if I only did it to charge up the battery. A shame.
Oh, and playing MP3s depletes the battery in next to no time. It barely survived a 2 hour flight. You're most definitely better off using something else as a music player.
Still, I love my new Sony PRS-600 e-book reader, and especially the cool way of turning pages by flicking across its touch-screen. It makes the experience almost as good as a real book. Of course, the screen is bigger, too, even if the reader is not very much bigger than the PRS-300. There is a small issue, sometimes, of the screen being reflective - mandated by its being touch sensitive - but it is a much less of a problem than you may have read elsewhere.
Finally, a small matter of price. I must admit to have got my PRS-600 refurbished which meant around 30% discount on the RRP. For that amount it is a very worthwhile purchase. Unfortunately, I still think the full price is too high for what you get, especially compared to the PRS-300. The outrage of e-book prices makes the whole issue a worrying one. Still, if you can find yours second hand or refurbished in a decent state of repair, I would heartily recommend you get one.
Oh, yes: PRS-600 continues to convince me Sony creates beautiful devices!
No comments: 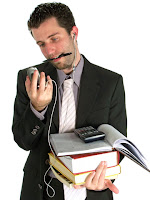 This is a service announcement for all of my three readers...

You may remember when, ages ago (at least in Internet time), I worried about having nothing (more) to say? Well, fear not. I have no such fear at this moment. What I do have, unfortunately, is an acute case of lack of time. At least I hope it is acute, and that normal service will be able to resume shortly.

So, this is to ask you to bear with me until I enter some calmer waters.